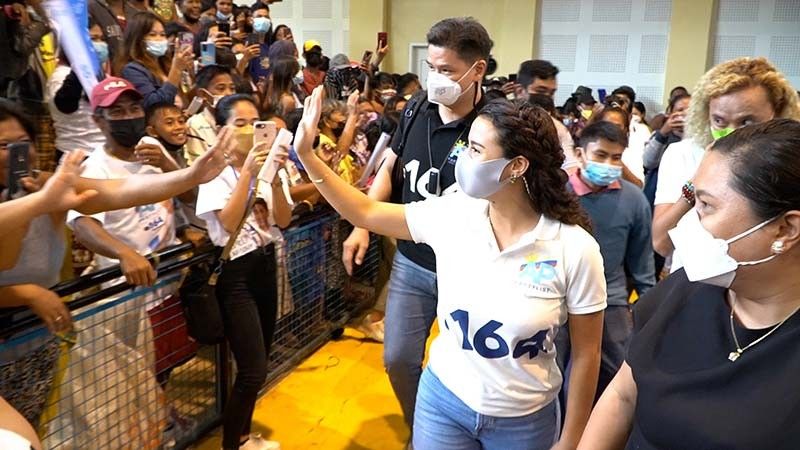 She was joined by Rep. Ronnie Ong, the first AP Partylist nominee, who demonstrated how the portable water filter system can be used easily by anyone.

“Bohol was one of the places hit hard by Typhoon Odette, and in December we brought thousands of boxes of bottled distilled water to distribute to residents. However, we saw that wasn’t enough, and that’s why we looked for a more sustainable alternative. These portable water systems can be reused over and over again and will come in handy when there is a water shortage,” Ong said.

The two bucket water filter and storage facility they donated can filter even dirty water, like river water, into clear and safe drinking water. The AP Partylist representative showed that the upper bucket is filled with raw water which is cleaned through the filter system, and the filtered water will then flow into the lower bucket. The water in the lower bucket is safe for immediate consumption. The replaceable filter can last up to 7,000 litres.

Talibon Mayor Janette Garcia thanked Pressman and Ong for their visit and said the portable water system donation will be of great help since the water filters do not require electricity to operate.

“We hope to help them prepare for typhoons as they live in a typhoon prone area, and we believe that having portable water filters in all barangay centers in Talibon, Bohol can help them greatly in times of of water scarcity. More than donations, we also want to equip them and empower them,” Pressman said.

The actress is a longtime friend and supporter of NGO projects. Last year, Pressman donated to the Philippine General Hospital with Ong when part of it was caught in a fire.

AP Partylist brought more than ten thousand bottles of water, bags of rice, food packs and loaves of bread to Boholanos days after Typhoon Odette tore through Visayan Island in mid-December. The donation of portable water filters in Talibon, Bohol is part of a series of bayanihan events led by AP Partylist in their continued response to the aftermath of Typhoon Odette.

Global sales of N95 medical protective masks are optimistic with