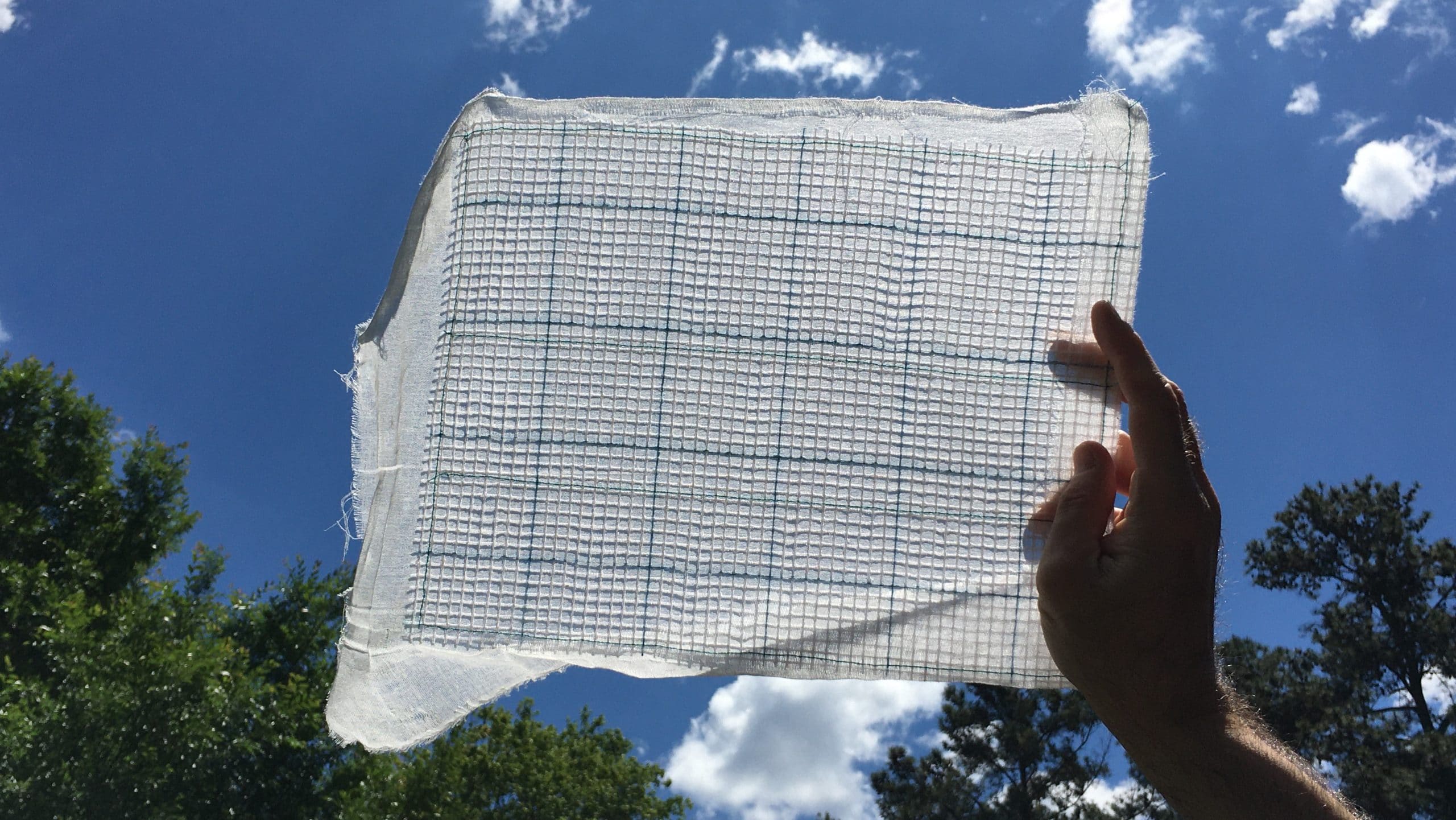 Researchers at North Carolina State University have found they can filter carbon dioxide from air and gas mixtures at promising rates using a proposed new textile-based filter that combines a fabric of cotton and an enzyme called carbonic anhydrase – one of nature’s tools for speeding up chemical reactions.

The results initial laboratory tests represent a step forward in the development of a possible new carbon capture technology that could reduce carbon dioxide emissions from biomass, coal or natural gas power plants. And while the filter would need to be significantly enlarged, the researchers believe its design would make this step easier than other proposed solutions.

“With this technology, we want to stop carbon dioxide emissions at the source, and power plants are currently the main source of carbon dioxide emissions,” said the study’s lead author. Jialong Shen, postdoctoral researcher at NC State. “We believe that the main advantage of our method over similarly targeted research is that our method could be easily extended using traditional textile manufacturing facilities.”

The centerpiece of the research team’s design for a proposed textile-based chemical filter is carbonic anhydrase, a naturally occurring enzyme, which can speed up a reaction in which carbon dioxide and water will turn into bicarbonate. , a compound of baking soda. The enzyme plays an important role in the human body; it helps transport carbon dioxide so it can be exhaled.

“We borrowed this wonderful enzyme in our process to accelerate the absorption of carbon dioxide into an aqueous solution,” Shen said.

To create the filter, the researchers attached the enzyme to a two-ply cotton fabric by soaking the fabric in a solution containing a material called chitosan, which acts like a glue. Chitosan physically traps the enzyme, causing it to stick to tissue.

The researchers then conducted a series of experiments to see how well their filter would separate carbon dioxide from an atmospheric mixture of carbon dioxide and nitrogen, simulating the levels emitted by power plants. They rolled the fabric into a spiral so it could be pushed into a tube. They pushed the gas through the tube, along with a water-based solution. When the carbon dioxide reacted with the water in the solution and the enzyme, it turned into bicarbonate and dripped through the filter and tubing. Then they captured the bicarbonate solution and piped it.

When they pushed air through the filter at a rate of 4 liters per minute, they could extract 52.3% of the carbon dioxide with a single-stack filter and 81.7% with a double-stack filter. Although the results are promising and the researchers believe they are better than competitors, they need to test the filter against the faster airflows used in commercial power plants. By comparison, a large-scale operation would need to process over 10 million liters of flue gas per minute. The researchers are working with collaborators to scale up and compare their technology to other comparable technologies under study.

“It’s an ongoing story, but we got some really exciting early results,” said the study’s co-author. Sonja Salmon, an associate professor of textile engineering, chemistry, and science at NC State. “We have made very significant progress.”

In addition to testing the filters’ carbon capture rates, they also tested the filter’s operation after five cycles of washing, drying and storage. They found he could maintain a high level of performance.

“The enzyme can be kept at a lower temperature for a very long time and it will be durable,” Shen said. “The fabric provides it with physical support and structure, while giving it a large surface area to react with carbon dioxide.”

Capturing carbon dioxide is only part of the process – they are also working on the problem of how to recycle the liquid after it leaves the filter, as well as the process of turning bicarbonate into carbon dioxide so that it can be stored and disposed of or used for other business purposes.

“We want to regenerate the water solution we use with the filter so we can use it again and again,” Salmon said. “This side of the process needs more work, to make the regeneration energy of the solvent as low as possible.”

“There are many different ways to capture carbon dioxide,” Shen said. “The current standard in the commercial setting uses a reaction that is so fast, so robust, and binds carbon dioxide so well that it is difficult to remove the carbon dioxide. You have to use very high temperatures, which means a lot of power consumption. It makes your process more expensive.

The study, “Immobilized Carbonic Anhydrase on Structured Textile Packaging Using Chitosan Scavenging for CO2 Capture” was published online in ACS Sustainable Chemistry & Engineering. Co-authors included Yue Yuan, who has completed her doctorate. in Salmon’s team. The study was supported by NC State and the Sustainable Energy Alliance, the National Renewable Energy Laboratory (NREL) management and operations contractor for the U.S. Department of Energy, through a project funded by the Bioenergy Technology Office (BETO), as a collaboration between NREL, NC State, and the Center for Applied Energy Research at the University of Kentucky, using enzymes from Novozymes.

Summary: Innovative carbon dioxide (CO2) capture approaches are urgently needed to reduce and reverse the CO2 emissions that lead to climate change. Here we report the design, fabrication, and testing of high-efficiency, textile-based biocatalytic gas-liquid contactors made using versatile, durable, and readily available polymers, cellulose, and chitosan, and the enzyme immobilized carbonic anhydrase (CA) to accelerate CO2 absorption in benign, low-energy potassium carbonate (K2CO3) aqueous solvents. This new structured packing is able to withstand the CO2 scrubbing environment, will be simple to scale up and will be useful as a “drop-in” for conventional chemical absorption systems and will provide new opportunities for capture direct from the air. Immobilizing CA in a thin coating on textile packaging surfaces minimizes enzyme requirements, retains the enzyme in the absorber for high catalytic advantage and longevity during repeated use, and allows for downstream process flexibility by preventing AC from moving to other unit operations, e.g. high temperature desorption where the enzyme could become inactivated. Immobilization of CA on cotton fiber textile packaging materials by entrapment with chitosan has shown activity recovery of at least 49% and activity retentions greater than 68% after 10 repeated cycles washing and retesting over 5 days and up to 41% after 31 days incubation in 10% K2CO3 at 40℃. The lightweight biocatalytic textile packaging modules are sturdy and easy to handle, with no sharp edges or dust issues, as can accompany conventional metal packaging or particle immobilized enzymes. In lab-scale countercurrent CO2 absorption tests at total gas flow rates of 4 liters per minute, AC-immobilized textile gaskets provided average CO2 absorption efficiencies of 52. 3% and 81.7%, for single and double stacked fillings, respectively, compared to 26.6% and 46.4% for single and double stacked non-enzyme controlled textile packaging, and compared to 3.6% for glass Raschig rings containers filled to the equivalent height of single stacked packaging. The textile liners exhibited excellent solvent distribution throughout the liner, even at low liquid flow rates, maintaining uniform gas contact with the wetted solid contact surfaces over a range of different liquid flow rates, which enabled efficiency of robust CO2 capture. The biocatalytic textile lining retained 66% of the initial CO2 capture performance after 5 cycles of washing, drying, storing at room temperature and retesting over a period of 66 days. In a separate test with freshly made packing, a performance retention of 76.5% was observed after a 120 hour continuous recirculation life test.