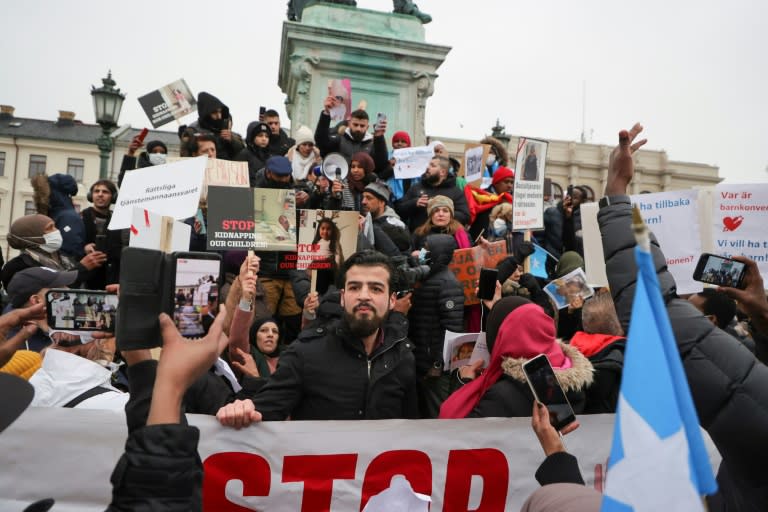 Swedish authorities are hitting back at allegations that its social services “kidnap” Muslim children, denouncing a “disinformation campaign” of viral videos sowing mistrust among immigrant families.

With limited context on the situations depicted, the videos accuse Sweden of being a fascist state where social services place Muslim children in Christian homes with pedophiles or where they are forced to drink alcohol and eat pork.

“We absolutely do not do that,” Migration and Integration Minister Anders Ygeman told AFP, stressing that the main objective was to support families.

Ygeman said the campaign was fueled in part by “frustrated parents who have failed in parenting” and projecting their anger at the authorities.

“There are also malevolent forces that want to exploit the frustration of these parents to sow mistrust and division,” he said.

Sweden’s new Psychological Defense Agency described many of the videos as old, presenting false context with a “polarizing lens”.

Magnus Ranstorp, a terrorism expert at Sweden’s Defense University, told AFP that the campaign was mainly based on a Facebook group called “Barnens Rattigheter Mina Rattigheter” (Children’s rights, my rights), where parents share their experiences of seeing their children “unfairly” removed from their care.

Radical imams in Sweden and abroad have picked up on these stories, as has a fringe new political party Nyans (Nuance), which has made the forced removal of children a rallying cry ahead of September’s general election.

Muslim online influencers with millions of followers have also joined the fray, as well as the Arabic site “Shuoun Islamiya” (“Islamic Affairs”), which has posted about 20 videos.

Ranstorp said while there may be legitimate criticism of social services, the harsh rhetoric in media posts was “inspiring”.

“Initially, it was probably a campaign where the families of those whose children were taken into custody felt they were being unfairly treated and wanted to criticize social services,” she told AFP. AFP.

“What happened is that this campaign ended up in the hands of forces overseas who put a religious filter on it and spread misinformation, which now looks more like a hate campaign against the Sweden and Swedish society.”

The Swedish National Board of Health and Welfare, which oversees social services, insists that removing children from their homes is always a last resort.

This is only done “when voluntary measures are not possible and there is a considerable risk that the health or development of the child will be affected”, the agency told AFP in an email. .

In 2020, a total of 9,034 children were placed by order of the state without parental consent, according to official statistics.

Researchers and social workers have noted that while more immigrant children are removed from their homes than native Swedes, immigrant families are also less likely to accept the early stages of help from social workers.

Sweden is often hailed as a pioneer in children’s rights and was the first country to ban corporal punishment of children, including spanking, in 1966.

But critics say dismissing the issue as misinformation ignores the real issues in social services.

Mariya Ellmoutaouakkil, 35, who immigrated to Sweden 12 years ago from Morocco, staged a protest outside the social services office in her hometown of Gallivare last year after two of her three children were removed.

She told AFP her 10-year-old son and six-year-old daughter were taken away after social services alleged abuse at the home.

She said the decision was not based on evidence, only on interviews by social workers with the children she was never allowed to see.

Social services generally do not comment on individual cases.

“It can start to feel like an abduction for me as a mother,” she said. “When we as parents don’t get answers, I can understand them calling it that.”

Sweden has struggled for years to integrate immigrants.

The wealthy country of 10.4 million people granted asylum and family reunification to more than 400,000 people from 2010 to 2019, more per capita than any other European country.

“Sweden still has a lot of integration problems, especially when it comes to segregation,” Agha told AFP.

She said many immigrants struggle to learn Swedish, live in areas where they only interact with other immigrants, and don’t feel integrated into Swedish society.