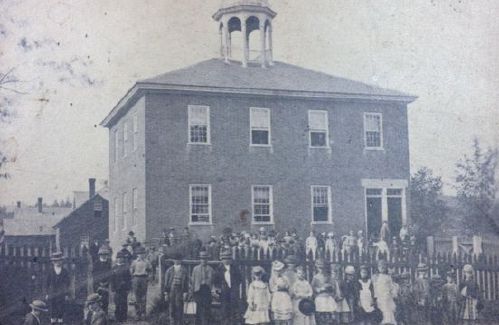 When the first settlers arrived in our small town, their priorities were quite simple, preparing for the coming winter to ensure their survival. Land was cleared, crops were planted, trees were harvested to build shelters and firewood. The thought of such a delicacy as formal education was not in their thoughts until a few years later. Garrisons were built and a meeting house built on the west side of our present North Main Street. This rudimentary building served as a shelter, municipal assemblies, religious services and a school.

The Massachusetts Bay Colony granted the land known as Concord in 1725 and named it Pennycook Plantation. When settlers started arriving in 1727, the name was changed to Rumford in 1733 and then to Concord in 1765.

As the years passed and our little community began to grow, there were more children. With many more children in need of food and shelter, the children had to contribute in the fields, on the farms, and anywhere else an extra hand was needed. Most children were homeschooled with the basics when not working during the planting and harvesting seasons. The community was increasingly concerned about a limited school system and plans were drawn up to construct buildings for the exclusive use of education.

At the north end of Concord, there were a series of early buildings used as schools mostly in the same location, at the southwest corner of North State and Church streets. This location is the lot known as Rollins Mansion or St. Peter’s Rectory building. There were two known buildings on this land built for the education of local children. This is the third school built on this site which has created a sense of controversy among people living in our community.

The new school was built on the same land as the previous schools and was called the Bell School. The school was built in 1820 and known everywhere as the most extravagant school our ancestors had ever seen. Citizens living in the North Concord District were very pleased with the modern structure that would educate their children for years to come. Unfortunately, the rest of the citizens were far more concerned about the cost of building the school, the impact on local taxes, and the unfairly inadequate school houses in other parts of town during this time. The lot was city owned with a history of previous use for school houses, plans were made and materials acquired. Some fine craftsmen were hired and the foundation was put in place. Progress was slow but steady as the foundations were completed, the building was framed and cladding was added. The roof has been completed and real bay windows have been installed, the type of windows that let in much of the natural light in the classrooms. After the building was completed, there was landscaping and a grand opening was planned. Unlike previous school years, these northern children looked forward to the start of school in 1820.

With much attention to the extravagance, there were concerns raised by the Concord Building Committee. Would the budget support the opening of the Bell School and how would it be perceived within the community? The building was not quite completed and the debt was still owed to the merchants when Captain Joseph Walker approached Judge George W. Nesmith and asked for the keys to the Bell School. Judge Nesmith was the first in charge of keeping the school in the new building while Captain Joseph Walker was a member of Concord’s building committee.

Judge Nesmith woke up early and went to City Hall to meet Captain Walker and the Concord building committee. He foresaw that it was simply an oversight and would be quickly remedied. He politely asked for the keys to the Bell School and was informed by Captain Walker that the Concord building committee had decided to retain possession of the keys as well as the school until the last of the bills were out. paid.

In the weeks leading up to the official opening of the Bell School House, the shopkeepers were compensated and the keys were finally returned to Judge Nesmith.

In 1875 Walker School was built and Bell School was permanently closed. Governor Rollins eventually built his mansion on the land, where it stands to this day in pristine condition after being renovated by the Potter family last year.

Sometimes the price of education is expensive, this state-of-the-art school built in 1820 was certainly expensive and a concern for people at that time. Limited education with inadequate schools was seen as a very sad price to pay. Yes, the Bell School opened its doors and the future of quality schools in Concord is assured to this day.

Vintage Views is a local history column that explores Concord and its surrounding towns. It airs weekly in the Sunday Your Life section. The author is a historian and not a staff member of Le Moniteur.