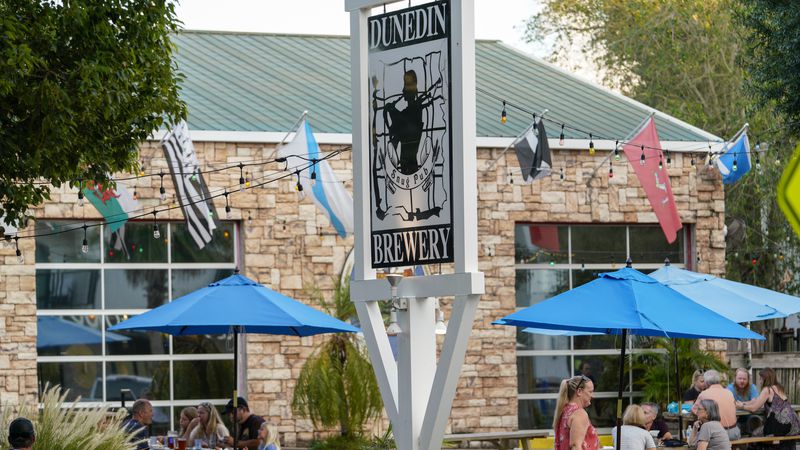 Dunedin aquatic plant damaged for at least two months. So, what about beer?

DUNEDIN – When Michael Bryant’s father opened Dunedin Brewery 25 years ago, he chose the northwestern town of Pinellas for a very specific reason: its the water.

â€œHe did his research on the chemistry of water to find out what was best for brewing,â€ said Bryant, co-owner of the family business. â€œThe quality of the water in Dunedin has always been consistent. This is important when you are making beer.

Brewing is a science; changes in the water can have a huge impact on taste, said Bryant. Dunedin’s water quality consistency – in large part thanks to special treatment at the city’s water treatment plant – is one of the main reasons eight breweries are now moving to the center. city â€‹â€‹of Dunedin.

So when the water factory unexpectedly caught fire last month, damaging equipment and disrupting the processing process, it was to the brewers that Dunedin’s director of public works Paul Stanek did some of the first calls.

â€œWe knew that affect our breweries, â€Stanek said. â€œWe wanted to make them aware of the situation as soon as we could. “

The cause of the fire is currently under investigation, Stanek said. In the meantime, residents are urged to conserve water, and the breweries around Dunedin are coping with the changes as best they can.

â€œIt’s definitely going to affect our costs a bit,â€ said Bryant. â€œBut it won’t be the end of the world.

Before the people of Dunedin turn on their taps and fill a drinking glass, their water goes through a series of chemical treatment and filtration processes.

Without going through the reverse osmosis filter, Stanek said the city’s water is still perfectly drinkable, but residents might notice a difference in taste and find a slight build-up of minerals. around their taps.

“[The water] meets EPA requirements and we still maintain that it is safer than bottled water, â€Stanek told city commissioners at a meeting last week.

In a standard treatment process, according to Stanek, Dunedin’s water is drawn from 29 groundwater wells located throughout the city, as well as the Florida Aquifer. All this water then returns to the plant, where it is treated with chlorine before being passed through a series of filters.

But reverse osmosis uses pressure to push water through a series of membranes.

A stream is drinking water. The other goes to the waste treatment plant for treatment and is recycled as reclaimed water to be used for things like flushing toilets and washing dishes.

Since the reverse osmosis process is currently down – and likely will be over the next two months, Stanek says – the city is asking residents to conserve water by avoiding heavily used activities like watering lawns. and car washing.

â€œThe water is safe to drink, but our systems are strained because we operate with less equipment,â€ Stanek said. â€œWe are asking our residents to conserve water to reduce the pressure as we work to get things going again. “

But what about beer?

It’s the reverse osmosis process that makes water so good for brewers, according to Bren Cueni, co-owner of Cueni Brewing Company in Dunedin. This is because of the consistency of the water after it has been filtered.

Each brewery makes their own adjustments to the water early in the process, depending on the type of beer they brew.

A brewer can add baking soda, calcium chloride or Epsom salt, Cueni said. This mainly involves adjusting the acidity of the water, which affects the reaction with the hops, yeast and grain. It is the subtle changes in these reactions that produce variations in flavor in different brews.

â€œWe have an Excel recipe spreadsheet, and for each of the beers, we do a different water adjustment to get it where it needs to be,â€ Cueni said. “Without knowing the basic quality of the incoming water, you cannot make the necessary adjustments to keep a beer true to taste.”

â€œIt’s not as bad for seasonal beers or specialty beers, where the flavor is going to change,â€ Clemo said. “But if you have a signature brew that people know about and are looking for, this is where it gets tough.”

Clemo said the breweries sent a water sample to a lab for testing last week. With the results, they will try to adjust the recipes accordingly. But the quality of the water can change from week to week; then it would be back to the drawing board.

“We stopped brewing at first, and now we’re a little late [on stock]”Said ClÃ©mo.” But the city has been great in letting us know what’s going on and we’re just hoping for the best. “

It’s the same feeling expressed from brewery to brewery. The sooner the reverse osmosis process returns, the better. But in the meantime, brewers are doing what they can to adapt.

â€œWe’re actually using that time to replace some of our equipment so it hasn’t really affected us yet,â€ said Dave Dally, head brewer at Caledonia Brewing. â€œI don’t know yet what I’m going to do when things are up and running, but we’ll find a solution. There will be no shortage of beer.

As brewers scramble to adjust recipes, Stanek said the city is awaiting answers on the causes of the blaze, the extent of the damage and the timing of the repairs.

The city initially reported that the fire was accidental. Now an investigation is underway to determine what went wrong.

But Stanek said the real punch is that the damaged equipment was brand new. In the past two years, Stanek said, the city had spent around $ 32 million replacing decades-old equipment at the water treatment plant.

â€œWe had been under construction for two years and we were here at the end of the tunnel,â€ Stanek said. â€œNow we have to start over. It’s disgusting.

Stanek said the cost of the damage was still being determined, but the water plant is an asset covered by the city’s property insurance through the Florida Municipal Insurance Trust.

While he hopes the reverse osmosis process will be up and running within the next two months, Stanek said full repairs to the building – which suffered damage from smoke – could take up to a year.

What’s better: a water filter for the whole house or under the sink?